CLECAT spoke during “After the dream – Preparing for the UCC reality”

On April 27, CLECAT President Steve Parker spoke at the seminar “After the Dream – preparing for the UCC reality” held in the WCO, Brussels. In his speech Steve Parker highlighted the impact of the UCC on the freight forwarding industry and outlined some remaining wishes for the Commission to address in the future.

He praised the Commission services and the team of Mr Kermode in particular in the significant achievement of getting the legislation agreed and published before the deadline of May 1st 2016.

In welcoming the improved focus on trade facilitation in the UCC and the push toward full electronic customs, he noted that a number of key issues were missing. In particular he highlighted the lack of clarity on the proof of union status and the need for a concerted effort to ensure the ambitious IT deadlines were met in a coherent and coordinated fashion. For the next stage of the implementation and development of the UCC, CLECAT looks for increased practical benefits for AEO, the greater use of self-assessment and for centralised clearance to become a reality.

The meeting closed with the Director of DG TAXUD Philip Kermode, in acknowledging that while the UCC was not perfect, it was nevertheless a step forward and he committed to even greater consultation and partnership with the trade community in the future. 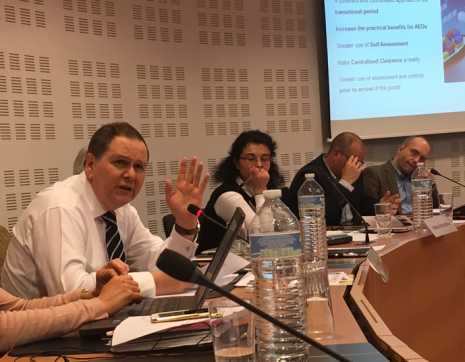